Max T. Barnes  wrote his first hit song at the age of 19,

Vern Gosdin’s “Way Down Deep". He’s been topping the charts ever since. Writing “Let Go of the Stone” by John Anderson

“At the Sound of the Tone” by Dukes of Hazard's John Schneider and   “Before You Kill Us All” by Randy Travis.

“Love, Me", the career launching hit For Colin Raye also took Max T. to the CMA awards as a CMA “Song of the Year” Nominee. But Max T.  did not win it that time around. Among other greats, he was up against his dad, legendary songwriter and Hall of  Fame member, the late Max D. Barnes. His father took home the award that night with  “Look At Us”, a co-write with Vince Gill. “My poor mom didn’t know who to root for.”  Max T. remembers. “I am proud to have been a part of the only father/son competition in CMA history.” His father, Max D., had also won in 1989 with “Chiseled In Stone”.

Max has been a staff writer and producer in Nashville for nearly thirty  years. Working under contract for Sony, Warner Brothers, Polygram, MCA, Island Bound, Curb And Ray Stevens.

Early on however he also played lead guitar. Touring with

Bobby Bare,  Shelly West,  Joe Sun, Linda Davis and Tanya Tucker to name a few. He did tours with Reba, Garth Brooks, The Judds, Merle Haggard, George Jones and too many more to mention.

Recently Max T. Began a new chapter in his carreer by taking his show on the road. "I have spent my life writing songs for other folks" laughs  Barnes "Now I want to go sing them for the people without the middle man." Barnes intimates-  " There is a starvation for Country music happening right now -I just sing my hits and my dad's hits and tell the stories behind the songs and the folks seem to love it!"

His songwriting credits range from Ralph Stanley to Montgomery Gentry. Poison to George Jones. Among his latest singles were two Joe Diffie hits, “A Night to Remember” and “Tougher Than Nails” as well as the title song and single from the Billboard #4 Comedy album, “We The People” by Ray Stevens. 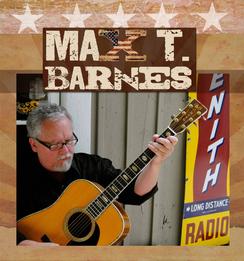