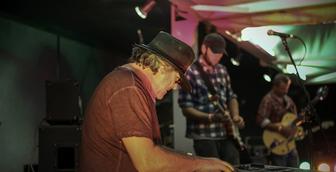 Bryan is a gifted, self-taught musician who began his musical career on an old Hammond Organ at the age of 12. Most of his teenage years were spent in front of his keyboard and he was multitrack recording by the time he was 15. So proficient is he playing his instrument, the keyboard, that it has become a physical extension of his mind and imagination. His creativity is unique and he has an incredible ability to transform simple tunes into masterpieces. Bryans speed and diversity is nothing short of amazing with his ability to produce music in almost any genre - from full orchestral through to rock, jazz, country and contemporary. The speed at which Bryan is able to compse is equally astounding - sit back and listen as within minutes, tracks are composed and pieced together with precision to produce the most incredible results. Bryan has performed on a worldwide stage and has now settled in North West Australia. Bryan and his studio SpinFX Audio are a true asset to the Pilbara region and Western Australia.